It’s crazy to think that as we sit here today on January 18th, we’re exactly one month out from the NBA All Star Game and 3 months and one day removed from the gruesome Gordon Hayward injury that occurred on opening night. The first 3 months of the NBA season have flown by!

The Celtics are sitting here just beyond the halfway point with a 34-11 record. I think I speak for all green teamers when I say that the first half of the season has been all we could ask for and more considering the Hayward injury and turnover to the roster from last year. They’ve answered just about every challenge their schedule has thrown at them. They’ve already beat the top 7 teams in the NBA in terms of win-loss record (only team to do that). They have the second best record in the league, and have played one of the most condensed schedules in the first half of the season, due to the road trip to London for a game with the 76ers last week.

Despite having the best record in the Eastern Conference, it seems that the media continues to underestimate just how good this team is. Nobody has gotten under my skin more than Charles Barkley when it comes to disrespecting the Celtics. Some of you may have heard his comments regarding his thoughts on the Celtics when they played the Warriors and Rockets. For those of you who haven’t, let me remind you.

Back in November, Barkley had this to say before the game against the Dubs.

Then at halftime, Barkley decided to chime in again with his thoughts on the Celtics as they trailed the Warriors by 5.

“I’m sitting here watching, and I’ve watched them play maybe five times. They would not be favored in the Eastern Conference,” Barkley said. “I’m not even talking about Cleveland. I’m not sure they can beat Toronto or Washington. I’m just saying. I don’t know how they’re winning these games.

“Like if I’m the Wizards or I’m Toronto, I’m like, ‘this is a toss-up series. We can beat this team.’ This team right here, they put zero fear in anyone’s heart.

The full clip is right here for those of you who want to see it.

The Celtics would go on to beat the Warriors that night and hold them to only 88 points. Well below the 94+ points Barkley suggested they would score.

A little more than a month later, with the Celtics down big at half to the Houston Rockets, Chuck felt compelled to let the national audience know that the game is “O-V-E-R. The Celtics would go on to rally from 26 points down, the largest comeback in the NBA to date and beat the Rockets that night. 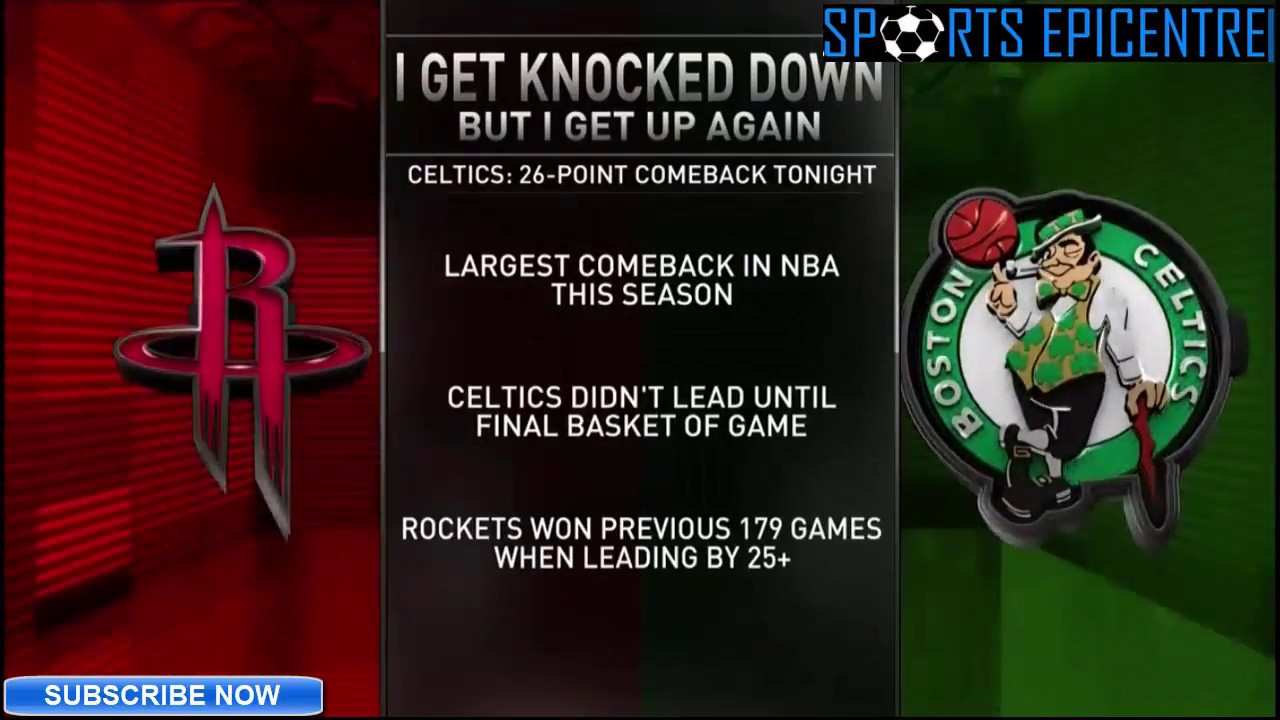 Now I don’t have a problem with Charles Barkley thinking the Celtics won’t advance to the NBA Finals. Everyone is entitled to their opinion and the Celtics are by no means a lock to get all the way there.

On the other hand, to say “this team right here, they put zero fear in anyone’s heart” is a slap in the face to Kyrie, Al, Brad and the entire squad. I’m not sure there’s a single team in the NBA who plays harder or is better coached. They had won 13 games in a row and had the best record in the NBA. Then to come back a month later and once again essentially count them out and declare a game “O-V-E-R” illustrates the lack of attention Barkley has paid  to the Celtics this year.

So many of you probably read Barkley’s comments and think “okay so he made a few dumb comments but has surely learned his lesson and understands the Celtics should be taken seriously.” Well believe it or not, on Monday night Chuck may have shown his biggest lack of respect yet.

I was sitting in my parents living room watching pregame for the Cavs vs. Warriors game on MLK night with my mother.  For those of you wondering, Yes… I’ve brainwashed my mother to sit down and watch any big NBA game with me these days. She’s even putting in NBA DraftKings lineups on her own. But anyways, I almost fell out of my seat when I heard Charles Barkley in this pregame segment on Monday night…

The Milwaukee Bucks!!? A team that hasn’t even won a playoff series since the 2000-2001 season. I immediately lashed out in anger to my mother when I heard this.

So let’s set the record clear “Chuck”, a team that won 13 straight games at the time of your comments in November “This team right here, they put zero fear in anyone’s heart”, a team that won 16 games in a row and has the second best record in the league isn’t even mentioned when asked just a few days ago who is going to beat LeBron James  to get to the NBA Finals.

Yet the 23-21 Milwaukee Bucks and Jabari Parker who’s coming off his second  torn ACL in in the last 4 years and has averaged 15.8 points per game in his NBA career could “put fear in another teams heart.”

I almost hope that Barkley has just been trying to troll Celtics fans at this point because of the hate he’s recieved from them on Twitter the last few month for his comments. If he truly believes his comments and overlooks the Celtics like this, then he has lost all credibility in my eyes.

Charles Barkley isn’t the only one who still hasn’t jumped on the Celtics bandwagon. As of Tuesday night the Cleveland Cavaliers who have lost 9 of their last 12 games and sit in third place of the Eastern Conference with a 26-17 record are still the heavy odds on favorite in Las Vegas to advance to the NBA finals. The Cavs are -140 to advance, while the Celtics sit at +240.

For those of you who aren’t familiar with betting terms, this means you would have to bet $140 on the Cavs to win $100, while a $100 bet on the Celtics would win you $240 if they advanced to the NBA Finals.

I don’t disagree that the Cavs shouldn’t be the favorites to win the East. Sorry green teamers but until LeBron is knocked off in the East, he deserves to be the favorite and you should know/respect this if you’re a Patriots fan with Tom Brady’s history. LBJ has made 7 straight NBA Finals appearances, a pretty amazing stat when you take a step back to take it in.

On the other hand, -140 vs. +240 is a huge discrepancy in the betting world. It’s a clear sign that Vegas and sports books have yet to take the Celtics as a true threat to the Cavs.

To my fellow green teamers, it’s been one hellueva ride so far this season. I look forward to a long playoff run and hopefully knocking the Cavs off with home court advantage in the East Conference Finals. If you’re someone that hasn’t totally jumped on the bandwagon yet, I suggest doing so now. A lot of people have a lazy argument that they don’t watch the NBA because “there’s no defense” or that “the players don’t always try.” I can promise you that the Celtics don’t fall into either of these categories. You’ll quickly fall in love with them if you follow them night in and night out… and I promise you, you’ll understand that they are a serious threat to become the first non-Lebron led team to get to the NBA Finals since our own Celtics last did it in the 2009-2010 season.

Feel free to share any thoughts on Chucks idiocy , if the Celts can take down the Cavs in the Eastern Conference Finals, or if any other team has a chance to get to the finals instead of Boston or Cleveland in the comments section below.