I’ve said it before in past blogs and I constantly talk about it among my peers, LeBron James is the most tantalizing athlete of my generation. People either love him or hate him. People criticize him for how he wins, how he loses, biting his finger nails, and at every available opportunity.

As we closed the books on the NBA Season last Friday, with the Warriors sweep of the LeBron Cav… I mean Cleveland Cavaliers, the NBA/Sports world immediately began to speculate where LeBron will land this coming off-season.  He will most likely head into free agency pending a $35 million player-opt out. Players on Twitter like Dejounte Murray of the Spurs and Enes Kanter of the New York Knicks have already began to make their push for LeBron to sign with their teams… 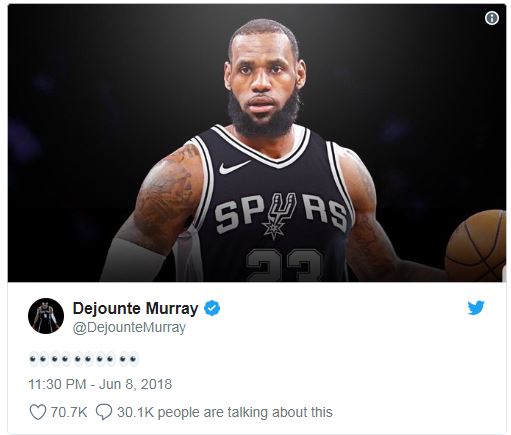 After all, who can blame these guys, who wouldn’t want LBJ? He’s still the best player in the world, best player of our generation, and better than Michael Jordan in some people’s opinions.

Boston sports media began buzzing last Wednesday when Stephen A. Smith of ESPN and a highly plugged in NBA personality, went on air and said LeBron will talk with the Boston Celtics this off-season regarding his free agency.

Now let’s set the record straight, the odds of LeBron coming to Boston right now are not very likely. Most sports books have the Celtics anywhere from 10-1 to 20-1. The Lakers are the favorite at this point to sign The King. The Celtics would have to jump through many hoops (no pun intended) to be able to sign him. First and most importantly is the relationship Bron’ and Kyrie Irving have.

Many people think Kyrie requested a trade out of Cleveland to get out of LeBron’s shadow. People believed that their marriage had taken a toll on each other. Other people, close to the situation, have said their relationship was not as bad as people think, and that Kyrie instead was sick of the Cavs organization.

For arguments sake, lets assume that Kyrie wanted out of Cleveland because he was sick of playing with LBJ. You’d have to believe that if LeBron came to Boston, that Kyrie would have to go… and at the very least Gordon Hayward and others, like Marcus Morris, would have to go in order to make the salary cap work.

Would sacrificing the 25 year old Kyrie Irving via trade for a 33 year old LeBron James be worth it? For me, it comes down to what a Kyrie trade could net you. If Kyrie could land you a guy like a Karl-Anthony Towns (22 years old), Damian Lillard (27 years old) or Kawhi Leonard (26 years old) then as much as it pains me to say it, I would give up Kyrie and bring LeBron on board. But if you have to give up Hayward to the Cavs in a sign and trade for LeBron (to make the salaries work for the Celtics), and then trade Kyrie because he doesn’t want to play with LeBron again and only get a kings ransom of draft picks, then as much as I love LeBron, I would have to be out on trying to sign him.

Now, putting all the salary cap and player relationships aside, the other simple question is, do Celtics fans even want LeBron to come play in Boston? Numerous shirts have been made in Boston over the years like … “LeBron’s a douche,” and “LeBron’s a bitch.”

I have plenty of friends who dislike LeBron and are always eager to chirp me when he has a bad game or loses in the NBA Finals. I love when they come at me saying “Michael Jordan would never get swept in the NBA Finals!” Some of them are already on record saying they wouldn’t want the Celtics to sign him because they don’t want to root for him.  I even put a poll up on Instagram today asking if Celtics fans would want him. Out of 70 votes, 69% of voters said they wouldn’t want him, while 31% said they would be in favor of LeBron coming to the Celts.

For me if all things were equal… of course I would want the privilege of being able to consistently watch one of the best NBA Players we’ve ever seen night in and night out. The idea of being able to go watch him play in person at the TD Garden, a handful of times throughout the year, is very exciting.

I’ve said it before and I’ll say it again, I consider myself very fortunate to have witnessed the achievements and greatness LeBron has provided over the last 15 years. I always tell my friends and the haters, “respect the greatness… because you may never get to see something like it again in our lifetime.”

As much as I want him to sign with the Celtics because of how great I think he is and how amazing I think the buzz around Boston would be with him coming here, I also just want him here to laugh in my friends and Celtics fans faces come next spring, when he would lead us to a guaranteed NBA Finals appearance and possible championship over the Warriors. I am sure that at that point all the “haters” would be bowing down to LeBron talking about how great he is and pulling a 180 saying how smart Danny Ainge was to get him here.

The last point I want to touch on is why it makes sense for LeBron to want to play for Boston. If he’s still concerned with winning championships, improving his legacy, and taking down the Warriors, who have beat him in 3 of the last 4 NBA Finals, then for pure basketball reasons Boston makes the most sense for him to win.

Jalen Rose of ESPN and former NBA Player went on record Monday morning saying “LeBron can only win a title with the Celtics or Warriors next year.” I’m not going to even consider the second half of his statement in regards to the Warriors… but coming to the Celtics makes all the sense in the world. He gets to play with 2 young guns that took the NBA by storm in the postseason, Jaylen Brown and Jayson Tatum. Both have young fresh legs and can help take the burden off him defensively and offensively during the regular season. He also gets to play with some kind of mix of Kyrie Irving, Gordon Hayward, Al Horford, or Kawhi Leonard/Karl-Anthony Towns. All of the aforementioned guys have proven their worth in the league as a mix of All-Stars, All NBA Players, and All NBA Defensive players.

If LeBron is more concerned with starting to settle down in his career and play in nice weather while continuing to grow his brand, then somewhere like LA or Miami may make more sense, but he won’t be winning any rings there compared to the chances he would have with Boston over the next few seasons.

Buckle up Celtics fans and NBA fans because the next month or so in the NBA is going to be wild as the draft and #WhereWillLeBronGo story-lines begin to unfold.