It’s finallyyyyy here. The NBA is back! People who know me well, know that the NBA is probably the sport I follow closest. I couldn’t be more excited for tip-off. The story-lines headed into the season are tasty per usual…

I could go on and on with this list. The story-lines in the NBA never end, whether it’s the off-season, regular season, or playoffs.

Here are some predictions of mine for the upcoming season…

Anthony Davis is a baadddddd man. I’m not sure people around Boston realize just how good he was last year. Davis was 2nd in the league in scoring, 5th in rebounding, 1st in blocks, 15th in steals, 16th in FG percentage, and even in the top 40 in FT percentage. The guy does it all on both sides of the court. The scary thing about Davis is that I think he’s only getting better. With DeMarcus Cousins bolting for Golden State, Davis’ usage and stats should only increase. The Pelicans brought in Julius Randle to replace Cousins. He should be a good compliment to AD. Randle is one of the better passing bigs in the NBA, which should only help to benefit Davis.  While Davis is shockingly somehow already going into his 7th NBA season, let’s not forget he doesn’t even turn 26 until March. The sky is the limit for this guy. He’s becoming a better shooter every year. Last year he made a career high 55 3’s and shot a career high 34% from deep. I’ve actually seen a handful of analysts predict that New Orleans’ won’t even make the playoffs. I think Davis is on the verge of a very special season. I envision him essentially carrying the Pelicans into a 5 or 6 seed and blowing away the field for MVP.

Rookie of the Year – Deandre Ayton

Some people may not think I’m going out on a major limb here, but you may be surprised to know that Mavs rookie Luka Doncic is the odds on favorite to win ROY, according to Bovada. Collin Sexton and Wendell Carter are names that have been mentioned as dark horses. There are a lot of strong candidates, but I think Ayton will get a lot of opportunity to pad his stats in the Suns run and gun offense, under new coach Igor Kokoskov. If you didn’t watch Ayton in college, the man is a flat out beast.

His combination of size, power and athleticism are something you don’t often see in a 7 foot center. People compare him to David Robinson and Shawn Kemp, which is very high praise. Ayton should be able to adapt to the NBA rather quickly. He’ll be starting from day one and the Suns will give him every opportunity to develop throughout the season. Ayton should be a walking double-double in his rookie season and for years to come. I’m expecting him to average around 17 points a game and 10 rebounds. Should the Suns make a push to the playoffs and make it as an 8 seed, which isn’t out of the realm of possibility, it should only increase his ROY chances compared to Luka, Trae Young, Sexton, etc.

I’ve long been a fan of Jamaal Murray going back to his days at Kentucky. Murray is bound for a big season headed into his 3rd year in the NBA. He’s always had a smooth stroke from 3 point land. I think Murray will make his mark on the league this year as one of the best young shooters/scorers. Murray just turned 21 in February, so he’s still learning his way around the league. Let’s also not forget that at Kentucky he played Shooting Guard. Since being drafted by the Nuggets he’s been asked to take on Point Guard responsibilities. Anyone who plays the game of basketball knows how much of a transition that is. A lot of responsibility comes with being the floor general for a team. At this time, Murray’s defense is still leaving a lot to be desired. Should he improve on that end of the court, it would only help strengthen his case to win the award this year. If he can continue to make strides as a play-maker, combined with his shooting and scoring ability, then Murray should be one of the finalists for MIP. 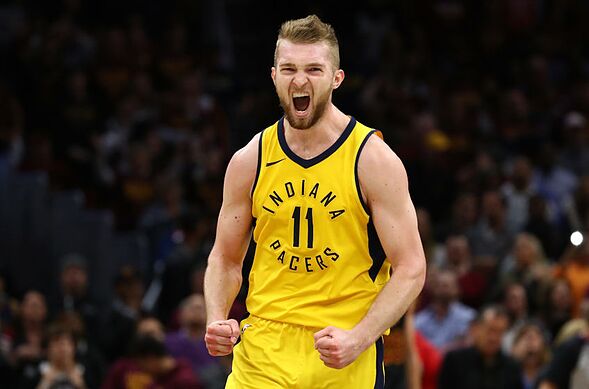 The Pacers were a great story last year. Everyone destroyed them for their Paul George trade, but it turned out to be a great deal for them. They got Victor Oladipo who was an All-Star and won Most Improved Player. They also received Domantas Sabonis who I think will now go on to win 6th Man of the Year in the ’18-’19 season. Sabonis will come off the bench with Tyreke Evans (who could also be a candidate for 6th Man of the Year). Tyreke showed last year that he’s still a very valuable player. Evans and Sabonis will feed off each other to form one of the best 1-2 combos in the league, off the bench. Sabonis is a very strong player in the pick & roll and this is a major strength of Evans as well. Sabonis is also a great rebounder and an above average passer (especially for a 6’11 Power Forward/Center). He has a good feel for the game and is headed into his 3rd season in the league, which is a good time for players to begin to mature and fully breakout.

I’m going to make this one simple. When healthy, Kawhi, “the Claw”, Leonard is the best defender in the NBA. People may have forgotten after his injury prone 2017-2018 season, but he will quickly refresh the memory of fans in Toronto. He’s won the award twice (2015 and 2016). Toronto ranked 7th in defensive efficiency last year. Trading Demar DeRozan for Kawhi was the only big move they made in the off-season. With the arrival of Kawhi, I expect them to jump into the top 5 this season… in large part due to Leonard. The way he changes a game on the defensive end of the floor is special. He can fill up the stat sheet with steals, blocks, and defensive rebounds. Then he can also be asked to defend a quick guard, stud wing scorer, or big man who roams around the 3 point line or can play in the post. There have not been many guys who have played in this league, who can defend just about every position on the court like Leonard.

Kawhi… how do you feel when people say Rudy Gobert or Draymond Green is the best defender in the league now?

Here’s Kawhi Leonard doing whatever the robotic equivalent of laughing is. pic.twitter.com/2ZzHM0B7nY 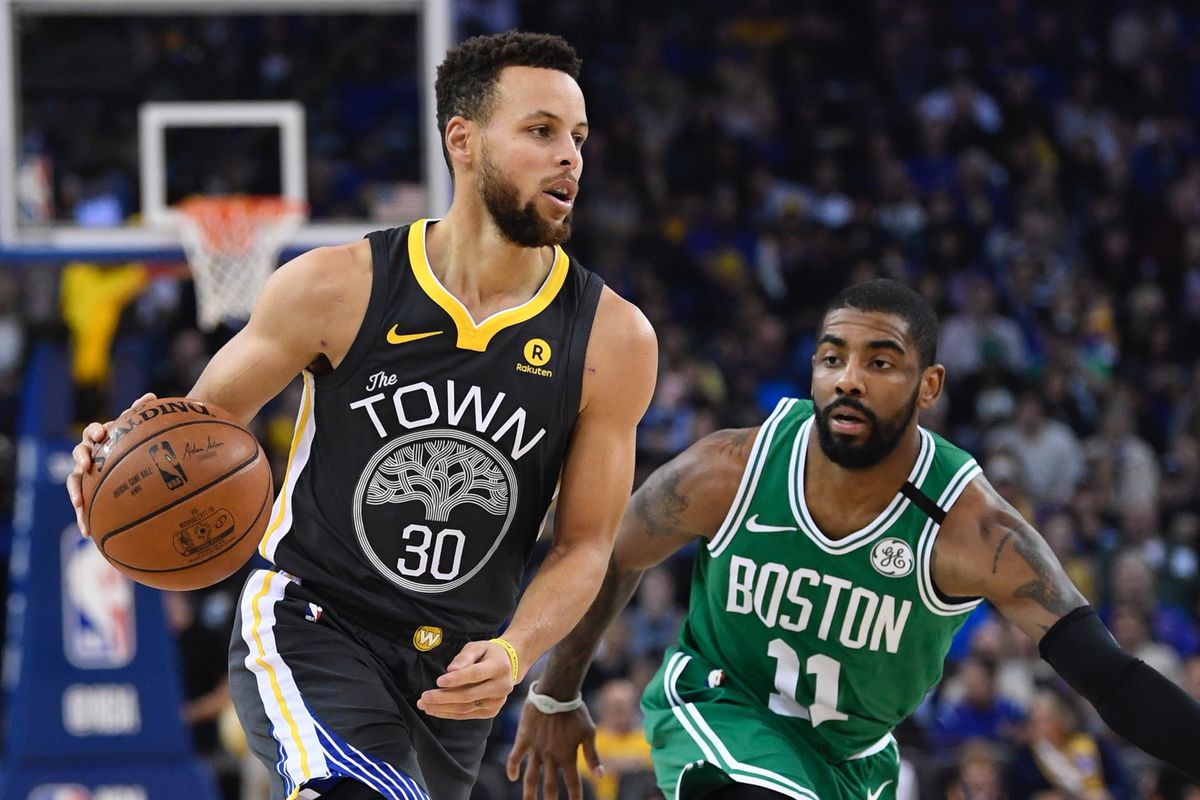 Last but not least… I’m predicting the most common NBA Finals match-up. But unlike most people, I think my hometown Celtics will dethrone the Warriors in a classic series. The Celtics match-up defensively with Golden State as well as anybody in the NBA. They have the athleticism and length to not get pick and rolled to death into bad-switches (which the Warriors run on a lot of teams). Jayson Tatum, Jaylen Brown, Gordon Hayward, Marcus Morris, Marucs Smart and Al Horford are all very good defenders. Brown and Tatum made serious strides defensively throughout the second half of last season and playoffs. They should only improve with another year under Brad Stevens. The Celtics have as good a bench as any team in the league. Terry Rozier, Marcus Morris, Marcus Smart and Aaron Baynes could arguably be starting for a handful of teams around the league. I think the Celtics have a stronger bench than the Warriors.

Both teams have 2 major questions heading into the season… and they probably won’t be answered until the second half of the season. For the Celtics, will Gordon Hayward return to his All-Star form after last years injury? Brad Stevens has already said Hayward will be limited to 25-30 minutes at the start of the season. I don’t think anybody is expecting Hayward to come out guns blazing in the start of the season. Everyone knows that it’s going to take some time for him to be back to his former All-Star self, but will it take him until February or will it take him a full year?

The Warriors on the other hand signed DeMarcus “Boogie” Cousins this off-season. Cousins has made 4 straight All-Star teams. The question with Cousins is never his talent or skill. Instead, it’s his work ethic and character. He’s also coming off a torn achilles and will most likely miss the first few months of the season. With Cousins we need to see first, if he’s healthy when he returns from injury and second, will he fit in well with the Warriors or will he prove to be a cancer in the locker room (like we’ve seen in years past)? A healthy and engaged Cousins will make the Warriors next to impossible to beat, but I don’t think we’re going to see both of those traits this year.

It should be another amazing year in the association. Enjoy it… and GO CELTS!!!!