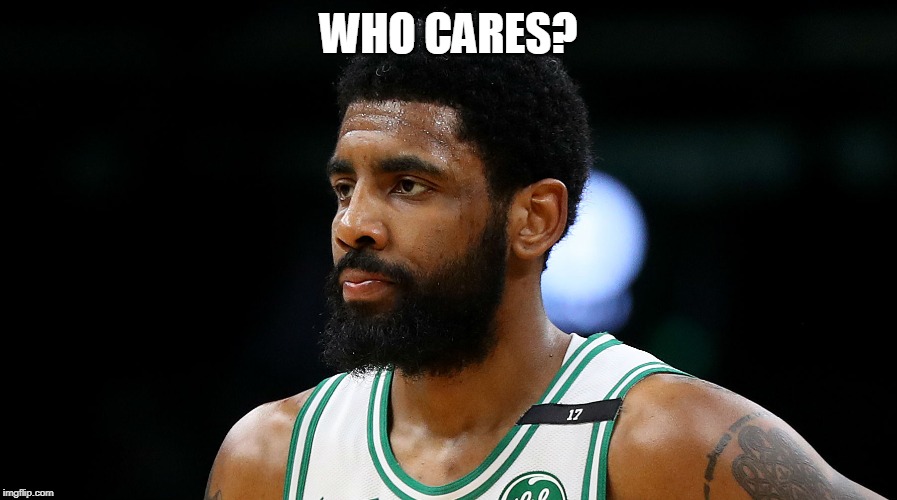 The Celtics’ season has finally come to an end. I have to say there’s a slight part of me that’s relieved. This team made me want to throw my remote through the TV numerous times throughout the season. I’ve been saying for months that quite frankly, this just hasn’t been a fun year. They weren’t a likeable team… especially after the run they had last year falling just short of the NBA Finals. It felt like every time they faced adversity, they just rolled over and tapped out. It never felt like the team was on the same page as a collective unit. I don’t want to go as far as to say they didn’t like each other, but I think it was evident that they weren’t exactly all best friends and inseparable on and off the court.

Now the questions in the coming days will begin with, “Who’s most to blame?”

Is it Kyrie Irving, who constantly threw his teammates under the bus early in the season and seemed to have had a change of heart regarding his commitment to resigning with the Celtics? Did it rub off on his teammates that he just “didn’t care”? (see his post-game conference after game 4)

Is it Brad Stevens who seemed to be unable to mesh together a team with egos and high expectations? This was a challenge he hadn’t been tasked with as yet, in his tenure as the Celtics head coach.

Is it Gordon Hayward who looked like a shell of his former All-Star days in Utah? As most people know by now, this isn’t exactly a fault of his own after his catastrophic injury back in 2017.

Is it Danny Ainge who didn’t try and cash in on the all-time high value of Jayson Tatum, Jaylen Brown, and Terry Rozier by trading any of them to land a star like Kawhi Leonard or Jimmy Butler to team up with Kyrie? Was it because he didn’t try to trade a package for Anthony Davis in the middle of the season, once Davis made his trade demand?

For me the blame starts with Kyrie Irving. He wanted the challenge of being “the guy” after forcing his way out of Cleveland, so he didn’t have to play in LeBron’s shadow. Unfortunately, Kyrie displayed multiple times throughout the season that he’s just not ready to be a leader.

Whether it’s on the court, field, or office, a team is always going to feed off their leader. Back in February, when the Celtics were struggling, he was asked if he’s worried that the struggles would continue into the playoffs. He responded with, “Nah we’ll be fine, because I’m here.” What about the players surrounding him and his coaches?
He then went on to have arguably the worst 4 game stretch of his entire career in the playoffs against the Bucks, shooting 25-83 from the field, looking disengaged, and playing lazy defense.

Earlier in the season, he took the liberty in announcing to the media that he called LeBron to apologize for his antics as a young guy. “I had to call ‘Bron and tell him I apologize for being that young player that wanted everything at his fingertips,” said Irving. The funny thing is I actually don’t think he meant for his comments to come out as indirectly taking a jab at young guys like Jaylen Brown, Jayson Tatum and crew, but it just goes to show he doesn’t have the mental awareness to lead a team.
When your leader deflects the blame in tough situations on his or her peers, doesn’t show up in the biggest moments of adversity, and starts answering questions with “who cares” in playoff post-game press conferences, then teammates aren’t going to follow your lead.

So now the next question for Kyrie, Brad, and the Celtics is, “What’s next?” The first matter of business is whether or not Kyrie will re-sign. I know that if you currently asked most Celtics fans whether or not they want him back next year, the answer would be no. For me, I can still EMPHATICALLY say I want Kyrie back in green next year. Did he deserve a lot of blame this year? Yes, of course, but like I mentioned earlier, there were plenty of other people to pin blame on. Who knows where this season would have gone had Gordon Hayward returned to his All-Star caliber days in Utah?

One thing appears clear, this Celtics team must choose a direction moving forward. Do you build around Kyrie and unload some of the young assets and draft picks for an All-Star (Anthony Davis please), or does Kyrie leave and you commit to building around Jayson Tatum, Jaylen Brown and the young core moving forward? Time will tell and you can bet that the media will beat this story-line to death in the coming months.